Author of the Month: DOYLE BURKE

Previous Next
Author of the Month: DOYLE BURKE

I live in a small town outside of Dayton, Ohio, a city known for the Wright Brothers, a slew of VIP patents for things like cash registers and cars, and a fair amount of sensational murders. Enter Doyle Burke, a local resident who became a Dayton Police Officer in 1978, rose to the rank of Homicide Detective and remained on the job for 22 years. When Burke retired from Dayton P.D., he took a job as Chief Investigator for the Warren County Coroner where he has spent the past 15 years. He has also taught Death Investigation at the Ohio Police Officer Training Academy for over 30 years while still doing his full-time job. His experience and expertise led him to write Death As A Living, an engaging and fact-filled account of some of the crimes he investigated during his tenure at DPD. 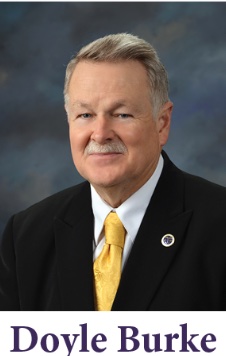 Janet Irvin: Welcome, Doyle. It’s great to host you on my site. Will you start by sharing with us how your book Death As A Living came to be?

Doyle Burke: As I worked Homicide, everywhere I went people would say, “You ought to write a book”. On a long airplane flight, I decided to write one. During the five hours in the air, I made notes of techniques I wanted todiscuss and the cases I wanted to use to highlight them. I was on call 24/7 so when I would get home at an odd hour, I would just stay up and write. In less than a year I had written my book, but it was far from being what I wanted it to be

JEI:  You worked with long-time journalist Lou Grieco to polish the book. How was it to write with another person?
DB:  I called my old friend and long-time journalist, Lou Grieco. Lou was living in Detroit then, so after we talked on the phone I e-mailed him a few chapters of the book. A few days later Lou came to Ohio and told me he wanted to be involved because he liked what he saw. We agreedLou would shore up the book and add some historical info where it was needed. We worked together via lengthy phone calls and e-mail exchanges. Lou and I have been friends for decades and worked well together. Soon, we had our book.
JEI: Your non-fiction account of some of Dayton’s most sensational crimes is riveting. Which of those was the most horrifying to cover? Which was the most gratifying to solve?
DB: In writing the book, I wanted to give the average person a feeling of what is like to work cases like these. As such, I am often asked which case was the most horrifying or gruesome. I don’t know. I’ve dealt with entire families being murdered, people shot and killed on Christmas just for fun, and yes, even a baby in a microwave. You can’t rank tragedies. Every case you solve is gratifying in its own way. And every case is different.
JEI: Everyone always likes to know how a writer got an agent and a publisher. What is the story behind your adventure in publishing?
DB: Lou and I acted as our own agents. We talked with several publishing companies. We learned quickly that the big publishers were not interested in a first-time author. We also learned that the little publishers brought very little to the table. We did some research andfound Inkshares Publishing. Inkshares had multiple successful books and a good reputation for promotion of their books. Their concept was simple. You are given ninety days to pre-sell 750 copies of your book. If you succeed, they edit, print, and market your book. We accepted the challenge. In just a few weeks we had over 1,000 pre-orders. We then worked with the staff at Inkshares and edited and fact-checked and worked together to make our book a real, professionally written book. They didn’t change the book, they refined it. I was very pleased with the final, edited version. On 12-21-2021 the book was released. The marketing from Inkshares has been superb. Newsweek named “Death as a Living” as one of their 21 favorite books of 2021.
JEI: What advice would you give to a person contemplating writing a non-fiction book?
DB: True crime is obviously in the non-fiction genre. As such, it demands accuracy of the facts you are writing about. It was easier for me because I worked these cases. However, dates, times, and names had to be fact-checked in every case. While I delved into newspaper archives and available police records, most of my research was done online.
JEI:  You have had a number of different roles in law enforcement. Which role was the most challenging?
DB: I have been a Homicide Detective, a Coroner’s Investigator, and now a cold case Homicide Detective. Each is similar with some small distinctions. Homicide Detectives can never stop and take a break. When you are on a case with promising leads you work them tofruition. There is no 9 to 5 on this job. A Coroner’s Investigator’s job is similar as you are always on call and are still investigating deaths.
However, not every death is a homicide, and the role shifts to what the victim’s body can tell you as opposed to running down leads. While investigating homicides as a cold case Homicide Detective, there is not as much urgency, as typically years have passed since the homicide. You are looking at what new lab procedures can be used on existing evidence as well as tracking down witnesses and suspects. While I have enjoyed all three roles there is nothing that compares to being a Homicide Detective.
JEI: Do you have plans to write a follow-up book?
DB: I currently have no plans for a follow-up book. “Death as a Living” has exceeded my expectations and told the story that I wanted to tell.
JEI: What has been the most rewarding aspect of being a best-selling author?
DB: I think the most rewarding aspect of being an author is having peopleseek me out to tell me that they enjoyed my book.
JEI: On a more personal note, where is your favorite vacation spot located?
DB: My favorite vacation spots are Las Vegas and the Gatlinburg area.
JEI: What’s your favorite local place to eat?
DB: My favorite local places to eat are Gameday, The Chop House, and Carrabba’s. 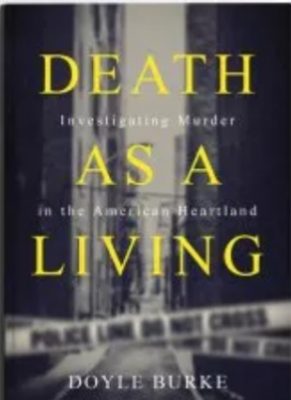 Doyle Burke can be contacted at burke623@aol.com.