Previous Next
June 2022 Author of the Month: TRACE CONGER

Welcome, June, and welcome to crime writer, Shamus award-winning author, and fellow Ohio University grad (Go, Bobcats!) Trace Conger, whose novels explore murder in the crime, thriller, and suspense genres. I’ve had the opportunity to share space with Trace at Mulberry Street Books in Lebanon, Ohio, and pick his brain a little about the writing process and this writing adventure we share. He is the author of the Conner Harding and Mr. Finn series 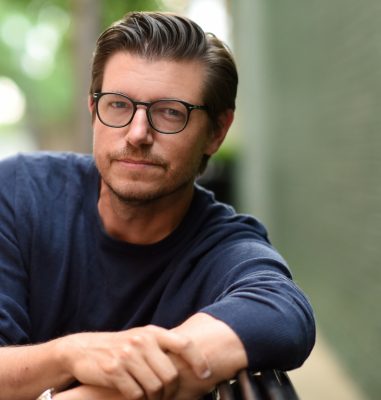 Janet Irvin: Trace, let’s talk about choosing this writing path. What happened in your life to bring you to writing?

Trace Conger: I’ve always enjoyed writing. Even back in junior high school, it was something I gravitated to. I loved the idea of creating a world and telling a story. As a kid, I loved movies and video games (still do), each a different storytelling medium. But it wasn’t until I was in college (Ohio University) that I actually learned the mechanics of writing. That also introduced me to critique groups, how to take criticism to improve my writing and how to read stories with an “author’s eye.”

After leaving college, I ended up as an advertising copywriter. Then, eventually, I turned to writing novels, which was more fulfilling than trying to make companies look more interesting than they really were with advertising copy.

JEI: I find that everything I’ve experienced creeps into my writing in some way. How much do events from your own past influence your characters and plots?

TC: Luckily, since I write crime fiction, there hasn’t been much from my own past that has influenced the plots, but many of the conversations I’ve had with those who run in related circles (both law enforcement and criminals) have influenced the plots. My character, Finn Harding, the main character of the Mr. Finn series, is based entirely on a conversation I had with an ex-private investigator who nearly lost his P.I. license due to some, let’s say, unscrupulous activities.

He didn’t lose his license, but I wondered what would have happened if he had. He would have lost out on the “bread and butter work” for PIs. So, when it came to developing Finn Harding, I put him in a similar predicament, but Finn did lose his license, which meant he could only work with the type of people who didn’t care that he was unlicensed, and those people were criminals. That led to some interesting plots, such as finding a criminal banker who up and split with millions in stolen mob money or an information broker who was stealing and then selling peoples’ identities.

JEI: Every writer dreams of being recognized for their work. How did it feel to win a Shamus Award for your first book, The Shadow Broker? Can you tell us how that came about?

TC: That was an incredible feeling because it was my first book. I then assumed that if I won a big fancy award with my first novel, I would likely continue winning them. That wasn’t the case. Although THE WHITE BOY did nab me the Fresh Ink Prize for Best Novella in 2020.

The Shamus Awards are sponsored by the P.I. Writers of America, and there is an open call every year. As long as your book meets specific criteria, anyone is welcome to enter. Figuring I had nothing to lose, I sent THE SHADOW BROKER in, and somehow it won. I got to go to the awards ceremony at Bouchercon, a national mystery conference, which was a blast since I met Lawrence Block and drank a lot.

JEI: See, there’s one of those ‘experiences’ that can lead to new ideas. 🙂 Your books are described as having subtle humor. Care to talk about how to write humor?

TC: It should be clear from this interview that I am utterly hysterical. Humor has always played a big part in my life, so it’s no surprise that it permeates my novels. I write about some heavy subjects, which on their own aren’t funny, but I still find ways to work in humor, usually in the dynamics between certain characters. There’s a reason people laugh at funerals. It helps ease the tough times, and most of my characters are going through things.

As far as how to write it, I have no idea. I think it comes naturally to me. And I think it’s one of those things that you just know when you’ve got it. Like head lice.

JEI: Now you’ve got us all scratching! So, your books are also labeled as having dark themes. Do you agree? If so, what led you to go down that darker path?

TC: They do, and that’s because I find the subject matter interesting. To me, there isn’t much drama in rainbows and unicorns, so I have to take the story into darker places. My third novel, THE PRISON GUARD’S SON, was heavily inspired by a real child murder in the UK. That was a terrible case, one they still dissect today, but the murder casts a heavy shadow over the story. Writing about such topics lets me explore how my characters react in these situations. PRISON GUARD was all about retribution and redemption and whether people can change after committing horrible acts. I had to get dark and dirty to explore it.

JEI: You have a new release this very month. Details, please. 

TC: My latest novel, CATCH AND RELEASE, will be available on June 7. (Eager readers can head over to www.traceconger.com if they want to get more details and pre-order.) This is the second novel in the Connor Harding series, but it’s a prequel to the first novel, so I guess it’s now technically the first? Who knows, math is tough.

The novel is a vigilante justice thriller and follows Connor, an ex-mob fixer and the go-to man for solving problems for the underworld’s most dangerous criminals. He’s on vacation in Maine when he’s approached by a violent hitman (Freddie) whose family was murdered 12 years earlier. Freddie wants Connor to solve the case, but Connor wants nothing to do with it, because he feels it’s unsolvable.

But, Freddie isn’t the type to take no for an answer. He gives Connor an ultimatum: solve the case, or Connor’s brother dies. Fearing for his brother’s life, Connor investigates the murders and slowly pieces the puzzle together. He uncovers a long-buried secret and quickly finds that no one, not even the victims, is who they seem.

It’s a fun ride and has one of those twist-ending things.

JEI: That does sound like a dark journey. As writers, we always have the option to write in different genres. Why write fiction rather than non-fiction?

TC: I’ve been a freelance writer for 12 years and have written plenty of non-fiction. More words than most people should be allotted in a lifetime. It’s pretty dull in comparison to fiction. Mainly, because you can’t kill anyone.

JEI: Fiction is more fun, I agree! Now, every writer realizes there are many important elements that make up a strong narrative arc. How important is dialogue in your writing?

TC: Dialog is incredibly important, and I’d say my dialog and narrative are pretty balanced. I love using dialog to reveal character, and I think it offers many opportunities to have some fun. As mentioned earlier, I tend to inject humor into my dialog. It’s an excellent way to break up a scene and to get to know the characters and their relationships with one another.

JEI: Trace, how would you describe the trajectory of your writing career?

I’ve known that I’ve wanted to be a writer for a long time, but it’s only in the last ten years or so that I’ve been able to make a living at it. My career has been all over the place; I’ve independently published some titles and others are with traditional publishers. Next year, I plan to put some serious effort into finding literary representation, as today, there are so many avenues for writers to pursue, including streaming entertainment channels, that require an agent’s help.

I’ll publish my seventh novel in June this year, but I feel as though my career is just getting started.

JEI: Thank you for sharing with us this month. As always, I like to ask a few more personal questions, like this one: who is your favorite fictional character? Why?

TC: My favorite fictional character is Jack Reacher. I love Lee Child’s writing and love Reacher as a character. I’ll admit he’s a bit of a trope now, but he’s a fun one and one I don’t think I’ll ever get tired of reading. Although I have to admit, Hercule Poirot is a very close second.

JEI: Do you have a favorite Cincinnati hangout or restaurant?

JEI: I was born in Cincinnati, and while I moved away to New York for a few years, I currently live in Cincinnati, so I feel like a lousy native for not having a hangout or favorite restaurant here. My favorite restaurant is Virgil’s in New York City. And I tend to hang out in a lot of seedy places. The seedier, the better, so, unfortunately, I don’t have a great answer for you. You’ll usually find me hanging out on my back patio with a scotch or a coffee in my hand, either reading a good book or yelling at my kids. Usually yelling at my kids. 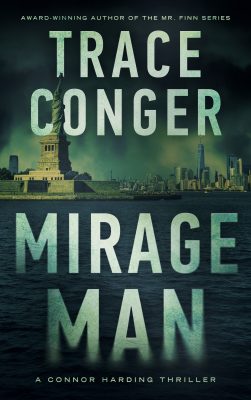 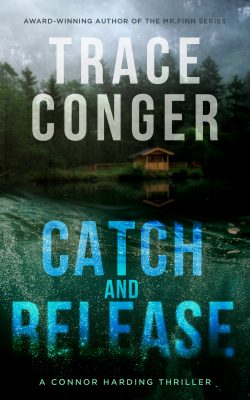 Find out more about Trace and his novels at www.traceconger.com